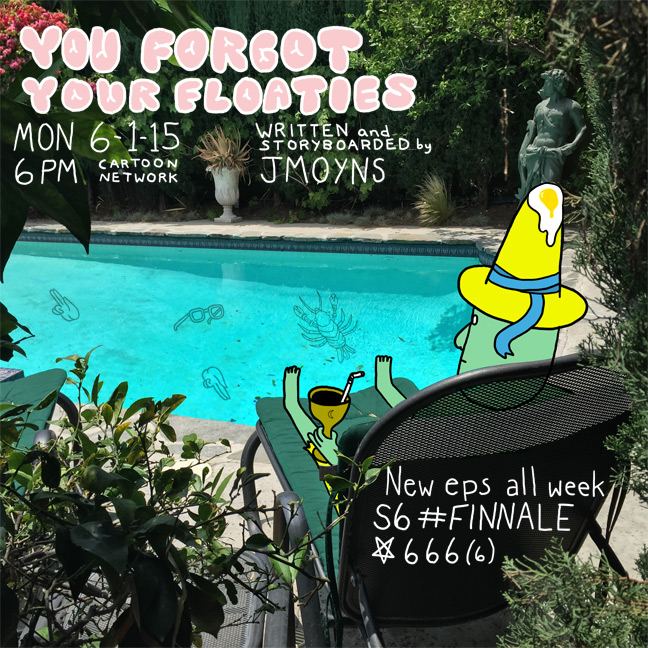 I’m posting this way early because I made it just now and I’m too excited to wait. The week of June 1 will premier new eps of Adventure Time every night, ending with the 2 part season FINNALE on Friday. The week starts off with this ep that I seeded the idea of and boarded solo.

I figure it’ll be best if I don’t talk about what’s up with this episode, so I made this drawing with a lot of stuff to chew on.

– The pool scene was inspired by the guest house/pool area of the place I stayed at when I first moved to Los Angeles. I stayed with the extended family of my brother’s (Justin) then girlfriend. That’s the actual pool in that promo picture with Magic Man. They let me stay there for 2 months or so which was really nice. Especially because they have a pool and a jacuzzi! Anyway, I had this idea about looking over the fence into your neighbor’s yard. I could maybe connect it to the feeling of Tim Allen’s neighbor in Home Improvement. I know that’s in there somewhere. The mystery of this guy who only lets you see his hat. That always stuck with me, even though that show was complete shit. It was like, this one magic thing in that super shitty show.

So I had this feeling about looking into your neighbor’s yard. I imagined looking into the yard of the family’s guest house I was staying in: Looking over the fence at night and seeing a black pool of water. That was the place where, if you’re brave and crafty enough, you can draw out some serious power, or you can be destroyed. It’s also that feeling of swimming in a lake at night and being afraid of what you can’t see swimming around in there with you.

– I remember saying somewhere that I would never explain what happened to Magic Man on Olympus Mons, and that maybe Ako and I had already explained too much in Sons of Mars. Tom Herpich and I talked about it on several occasions. That was definitely his feeling at the time, and after watching Sons of Mars, I agreed with him. Unfortunately, one of my personality traits seems to be that the more I say I’ll never do something, the more I think about how I could do it. I think that’s why I wanted to bring back Xergiok and Tiffany despite Pen thinking they were both crappy characters. So me saying, “I’ll never go into Magic Man’s backstory,” was REALLY me saying, “I will DEFINITELY figure out a way to tell Magic Man’s backstory!” The process of coming up with it had a lot to do with waiting and seeing how all the other episodes and character arcs were playing out, and how Magic Man’s story could fit in there.

It’s interesting to me how Adventure Time’s character arcs happen on their own time, rather than in a direct, continuous line. I think this is because all the pieces are falling all over the place, and you have to wait and see how they land. Then you gage where your ideas maybe fit in that landscape. It can take a long time to get an idea through at the moment where it’ll work harmoniously with everything else that’s going on. The philosophy of Adventure Time I feel, is that life is moving along without a “story”. Life is just life. The story part is the pieces that viewers put together. I don’t know if that’s a perfect description but maybe it’s a loose template for how our story threads work. My views do not reflect everyone else’s on the production obviously.