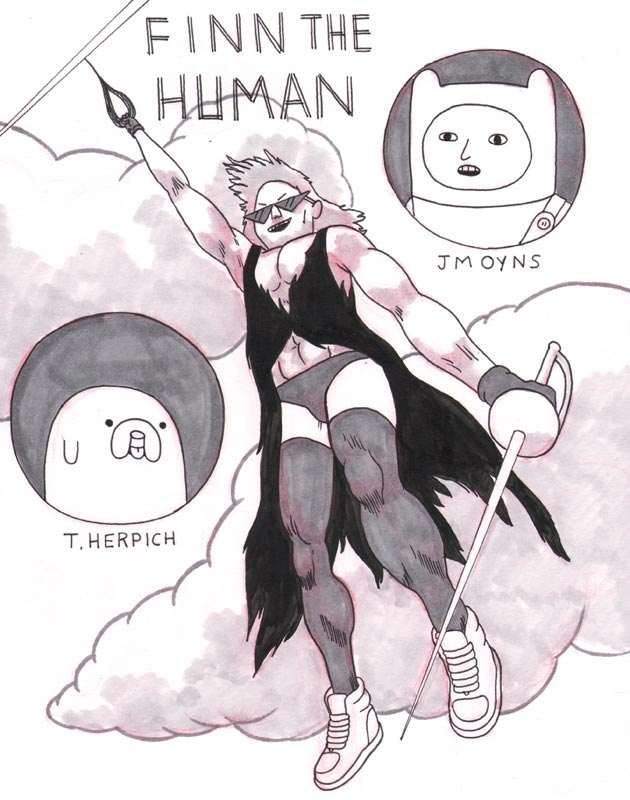 Monday at 7:30PM is the Season 5 premier of Adventure Time. It was boarded by myself and Tom Herpich. Part two was boarded by Cole Sanchez and Rebecca Sugar. I don’t really have anything to say about it, except that I think it hits all the marks. Hope you enjoy it.

With Finn and the viewer experiencing an alternate timeline, I thought it would be cool to design some characters that didn’t really fit in the Adventure Time world. That’s basically what the Destiny Gang were all about. The tone is I think, a little bit jarring, so I was worried that viewers would be put off by it. Not worried enough to not try it obviously. That’s the thing about writing for this show, is that I feel like you have to trust what you’re impulses are telling you to do. Otherwise you get into the trap of doing an impersonation of the show. So I took a risk by putting the Destiny Gang in there. At least that’s how it felt to me.

Their look was loosely inspired by the Fist of the North Star. Pretty much, everything I do is loosely inspired by FOTNS. Is that weird to admit? I saw it when I was 15 and watched it countless times throughout high school. I could write a big blurb about what makes FOTNS so awesome, but I have to go meet a friend in a few minutes.

The Prismo stuff was pretty much all Cole and Tom. And Finn going insane was I think all Rebecca. Whether or not the D Gang have an analog in the Oooverse I can’t say, but I’ve read some really cool meanings gleaned from their name from commenters. So anyway, hope you liked it.