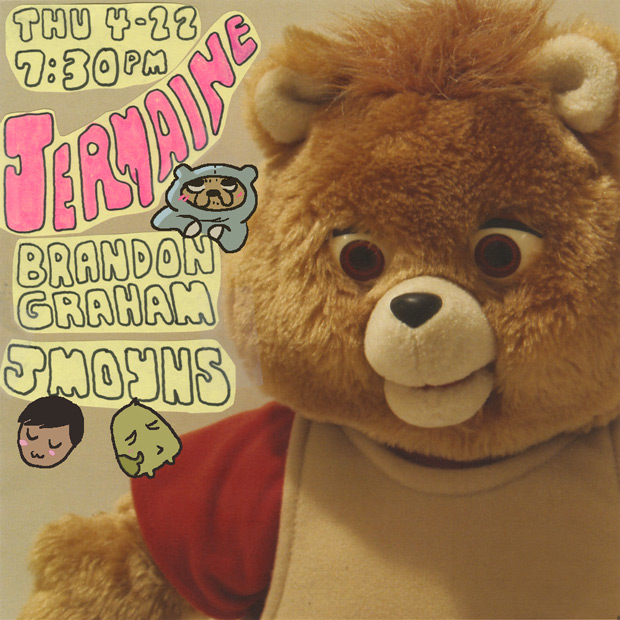 Thursday on Cartoon Network at 7:30 is an episode that already aired in South America. Some people saw it, but they didn’t see it with the voice talents of my one of my favorite comedy teams, Scharpling and Wurster. If you’ve never heard Jon Wurster’s character, Philly Boy Roy, then you are missing out on some of the funniest bits in the history of radio.

Tom Scharpling of course hosts the Best Show, which was over, but is now back as a podcast. Jon Wurster is a regular caller, and acts as a rogue’s gallery of awful people to Tom’s put-upon cranky, straight man. They’re great and I’m so glad they could participate in this episode.

I boarded Jermaine with Brandon Graham, who has created a bunch of great titles for Image (King City, Multiple Warheads, and his reboot of Prophet), as well as apparently schooling kids on 80’s anime on his Tumblr, haha. I met Brandon at a comics convention in San Francisco about 5 or 6 years ago I think. I had dinner with him, Dash Shaw and Frank Santoro. I don’t know if he remembers meeting me. I think I was feeling pretty shy and intimidated that he was doing books for Image. Also he had a huge elephant neck tattoo which was sort of intimidating.

Anyway Brandon is such a cool and chill guy, and his ideas are always really idiosyncratic and outside the box. I like the way he structures his comics, because they feel led by a sort of stream of consciousness logic, but they also have an inviting, broad appeal. That’s sort of how I see the way others see Adventure Time.

Sorry I have a lot to say about this episode. So Jermaine is a character that first appeared in the first episode I ever co-boarded, Crystals Have Power. I put him in as a throwaway joke about shared dreams, and beating up on your brother. At the time, I didn’t think that giving Finn and Jake this other lost brother would affect the world of Ooo in any real way. Mostly it didn’t. But I guess for the people paying attention and giving a shit about that sort of thing, it remained this unresolved, second tier mystery. After a season or so, it dawned on me that creating this other brother was sort of a big deal, and that it would be bad form not to explore his character.

Uh but there were no ideas for his character for a long time. I tried a couple times to re-introduce him. I had put him in another dream sequence in the abandoned TV movie. He gets a mention in The Pit. And a couple scattered visual references here and there I think. I wrote an episode premise about him that didn’t go anywhere, and I think one time I proposed having him be in the beginning of an episode and then leaving, as a sort of joke on his role in the show. Everything that happened after that is a totally fuzzy memory. I guess we had a writers meeting about Jermaine and then this episode came out of it. Every time I look through my gmail archives, it seems like gmail loses half of my emails. I don’t know if I’m just being paranoid or if gmail just dumps half of my emails. Or it just has a terrible email search engine. I don’t know.

So the final thing I have to say about this episode, is that there are some jingles in the episode that I co-wrote with my brother Justin, inspired by a certain talking stuffed animal from the 80’s. 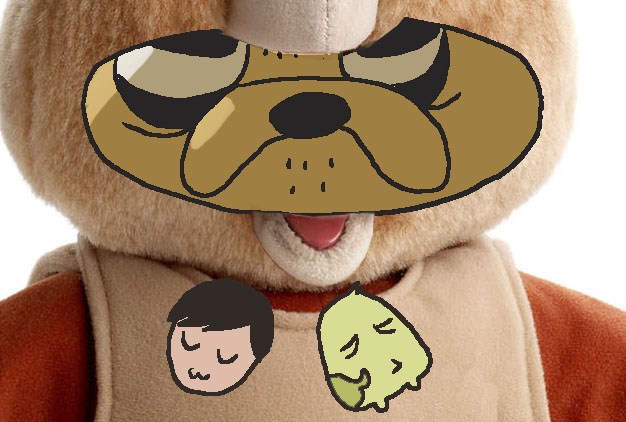 On an unrelated note, tonight I finally got around to watching Richard Linklater’s movie Before Sunrise. When the movie came out, I was a teenager and I didn’t believe in love, so I despised the idea of watching that movie. Now I’m in my 30’s and I don’t know if I can love again, so I wanted to watch this movie about falling in love to try to remember that feeling. I really enjoyed it, and I’m glad I could wait till this moment in my life to watch it, even though it fully reminded me of the energy I’ve lost to time and experience.