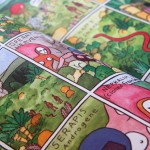 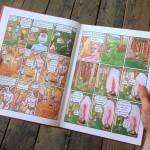 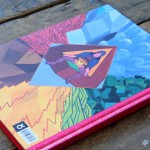 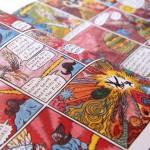 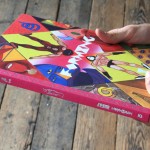 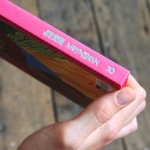 Since the dawn of human history, we as a species have sought to understand our existence through creationist fables of omnipotent deities, mythical creatures, and speculation of what—or who—may lie beyond the stars. In Forming Vol. 1, Jesse Moynihan takes these 50,000 years of socio-religious postulation and throws them in the blender to create one epic—and irreverent—battle royal between alien gods, Ancient Greek Titans, interplanetary assassin droids, and humanity itself.

An eon-spanning comedy, Forming details the spawning of worlds, and the trajectory of consciousness on Earth. The first in a trilogy of books, Nobrow is proud to collect the first volume of Jesse Moynihan’s acclaimed webcomic in a specially-designed graphic novel format truly worthy of its contents.

Opening on Atlantis, 10,000 BC, it is revealed that humanity has emerged from the primordial soup, only to be exploited for its labour by the alien super-being Mithras. Initially sent to Earth to establish an intergalactic mining colony for his father back on planet Dogon, Mithras petulantly gives the finger to Daddy, and decides to keep the planet’s spoils for himself. Constructing an opulent pyramid fortress, the alien begins an inter-species relationship with the divinely-marked human, Gaia, which results in the couple producing six children: a dysfunctional brood of Titans and Cyclopes. Marital bliss, it certainly isn’t, especially considering Gaia’s having a torrid affair with the devoutly religious Noah behind Mithras’ back.

Unbeknownst to the Mithras, across the ocean in Canaan, a second wave of Dogon invaders arrives. Led by the dual-gendered Seraphis The Androgyne, they embark on “Operation Heavenly Sword”, their mission to “extract” Mithras and establish a second mining operation. Encountering the primitive but telepathic Adam and Eve, Seraphis endeavours to teach them language and how to hunt, corrupting their natural innocence with his/her violent ways. Eventually, Seraphis too succumbs to the temptations of the little blue planet, severing communications with Dogon and having an explosive carnal dalliance with Eve. Soon enough, everything goes to hell (literally) as it transpires that the primeval being The Adversary (also known as Lucifer) has been attempting to pull the strings covertly from his fiery prison at the centre of the Earth. Seeking to retrieve the “Crown Jewel” that he lost at the climax of a billion-year battle that accidently created the universe, he craftily sets about turning the gods and demi-gods upon one another. This, combined with other forces, soon finds Mithras overthrown by a popular workers uprising led by his own son, Chronos, and Seraphis fighting a tenacious, intergalactic assassin with inferiority issues.